It’s ten years since Daithi Mac Sithigh established the student radio society Trinity FM. In doing so, he did more than add another campus to the BCI’s community license scheme. Daithi gave birth to a new community in Trinity, and the most open radio station in the country. A student could arrive in TCD during Freshers week, sign up at the plywood radio in front square and be on air ten minutes later, hosting their own show! Assuming they were capable of sustained puffery, refraining from racism and the more outrageous of libels, and avoided filling the studio with drunks / ether huffers / ecstasy men; they could be assured a second show.

Thanks to an intermittent license, shared with a number of other college radio stations, TFM could broadcast only six weeks a year. We tried to make them count, not least with an enormous party every broadcast week, where the college’s regulations on ‘refreshments’ were stretched to their limits. Part of what made TFM such a wonderful station was the sheer amount of air time that needed to be filled. This, combined with a lack of any dedicated media courses in Trinity, ensured a constant inflow of new broadcasters, producers and committee members. TFM gave birth to a host of creative endeavours in my time there, from Analogue Magazine to Technolotics, and it’s alumni include print and radio journalists, sports presenters, three comedians, one Billionaire For Bush and doubtless a few future celebricritters. 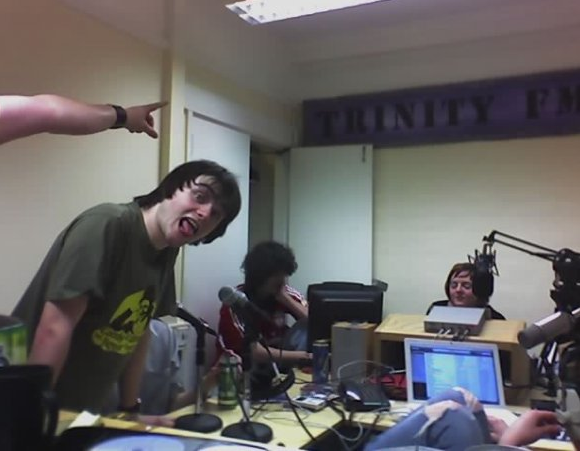 Table dancing at the AGM

TFM taught me about realpolitik. Obeying the unwritten law that the smaller the power base the more folks will fight to dominate it, my first couple of years in the station were occupied in battles to keep it out of the hands of various gibbering power mad hacks. But these teething troubles passed, and the station became more open, democratic (and I’m proud to say, female run) over time. We worked hard to make it a place where talent and enthusiasm were translated into airtime and roles on the committee. This experience accounts for my enthusiasm for places like Exchange Dublin – and has cemented a faith in the power of consensus run institutions to overwhelm the toxic actions of bad actors, in a way the top down hierarchies of modern business and electoral democracy can’t match.

Mark Hughes kicking back in the TFM studio This one means a lot to me, it’s the first piece of audio I ever edited. The theme tune to my old regular music show ‘Kick The Kat’

Anyway, enough pretentious musings, how seriously can you take a station who’s moto was ‘Coming In Your Ear’? I can’t be sure, but I like to think I came up with that one. In 2007 we were awarded TCD society of the year and our chair won best student. The year after we pulled a record number of applications together for the Student Media Awards. A couple of shows even got nominated, including a po-faced Americana music show called Footnotes. 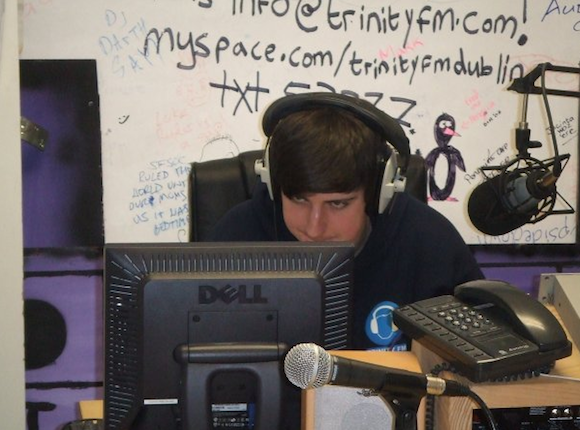 My trusty junior producer, Rónán Mistéil, hard at work in the then graffiti’d studio 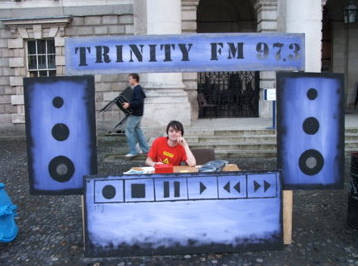 Over my years in TFM I produced a regular music show (kick the kat), a sex advice show (Thrust Us – still running!), an alt-folk show and a comedy show (the names of which escape me), as well as a million one, or two, or five hour fill ins when presenters overwhelmed with exam pressure missed their slots. It’d by lying if I said it didn’t negatively impact on the grades occasionally, but I don’t regret a minute of those carousing, offending, inflammatory broadcast weeks. Not even the ‘graffiti wall’ which all too quickly swelled to encompass the whole studio, including an enormous phallus hanging like a fleshy sword of damocles above our heads. Not the time our most humorous committee member got raked over the coals for describing striking nurses as ‘money hungry ward whores’. Nor the hours spent standing before an enormous wooden radio, shouting “You’ve got a face for radio” at jaded freshers. Not whispering in a darkened studio into the ether, who knows who listening at 2AM, lights off lest security kick us out, playing strange lost Charlie Mingus cuts and slyly drinking cocktails snuck up from receptions where dancing on tables had not long ceased. TFM, I salute you. One thought on “Radio Days – Ten Years of Trinity FM”