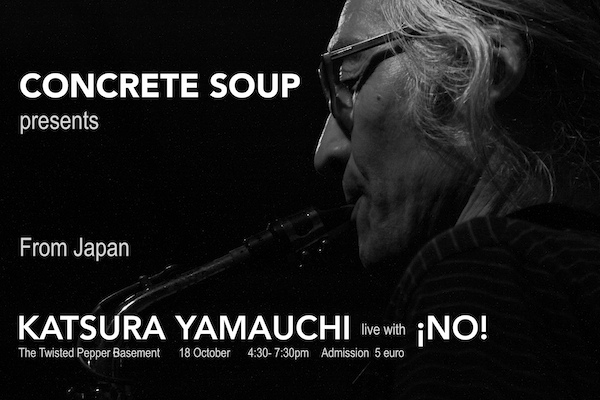 Hey folks, ¡NO! the psychedelic rock outfit featured in Episode 4 of Mad Scientists of Music, are running another of their monthly improvised music events in Twisted Pepper. This time they’re playing with avant garde Japanese saxophonist Katsura Yamuchi. If you fancy something chilled out and unconventional head down on the afternoon of October 18th. It’s a mere five euro.

From the black deeps of the Twisted Pepper Basement, the 3rd Saturday afternoon of every month, Concrete Soup has been bringing together international, national and local avant-garde musicians of all colours and stripes for nigh on a year now. Hosted by new psychedelic improvisers ¡NO!, Concrete Soup features a monthly guest and fuels itself on wailing walls of guitars, space jazz bass, brain bending keys, stair collapse drums, nuclear winter clarinet, high wire sax and generally mutant noise. Oh, and it’s often washed down with heavily psychedelic visuals. If you have a penchant for a mash up of the styles of Can, Pere Ubu, Captain Beefheart, Sun Ra, 70s Miles or early Sonic Youth, this will fix you nicely. October’s Concrete Soup will feature internationally acclaimed Japanese minimalist saxophonist Katsura Yamauchi. As per the usual form, Katsura will play a solo set as well as a collaborative set with hosts ¡NO!