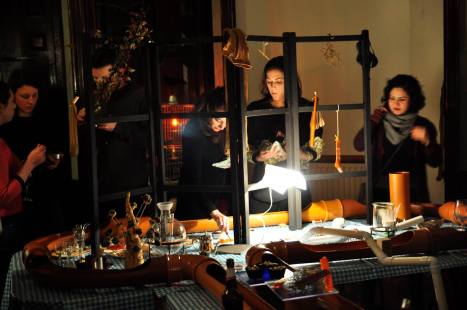 The tradition of artists creating provocative performance dinners, extends back at least to Filippo Marinetti’s Futurist Cookbook. The Futurists delighted in inedible meals, celebrating their love of speed, violence, and technology. The Domestic Godless, with their wilfully obscure ingredients, their exploration of culinary alternative histories, and their satirical recipes provide a more palatable, if no less creative dining experience. For my latest report for Culture File I visited Broadstone Studios, where delectable monstrosities were being served. What happens when you cross ice-cream with the contents of an Edwardian vanity cabinet? What did the stuffing from the seats of a 1974 Ford Cortina actually taste like? Truth and fiction stir into a potent mix when a godless chef table.

Sounds:
Living Pages
What You Should Know About Biological Warfare
Cooking Terms and What They Mean
My Little Margie – Episode 14, Series 3 – What’s Cooking