All horror movies are allegories. Romero’s Night of the Living Dead is a visceral articulation of the racial turmoil of 1960s America. The Shining is a through-a-mirror-darkly reflection on domestic violence. The Fly examines the dehumanising degradation and social opprobrium of the AIDS crisis. The best of them hold a multiplicity of interpretations, intended and unintended readings alike hidden behind door 237, if we can only find the right key. Too often in contemporary cinema, this higher purpose – the cathexis of our fears and traumas – is abandoned in favour of cheap jump scares and ‘fan service’ re-imaginings. Achieving something that wields the mythic cudgel of fear without becoming crushed under the weight of cliché isn’t easy.

The Girl With All the Gifts

All hail West Texas, land of slick rich quick schemes and rural desperation. Rarely has a crime caper placed such emphasis on the decay of the contemporary American West. ‘Three tours in Iraq but no bailout for people like us’, reads a tag in the opening shots of David Mackenzie’s gritty tragedy.  Ben Foster (playing a black sheep Ben Foster type), and a distractingly handsome Chris Pine (playing Josh Brolin from No Country For Old Men) are Hell & High Water: Fiercely affectionate good ol’ bros; authentic American antiheroes who communicate exclusively in brandoesque growls. Everywhere the camera turns, under beautifully expressive plains clouds, ‘Closing Down’ and ‘Debt Relief’ signs war for attention with the ramshackle landscape of White American poverty. This is a land plagued by bush fires, debt and televangelists.

Generally, I can’t abide criticism. Outside of academia, it serves little function beyond banal consumer recommendation. However, my principles won’t get me free cinema tickets, now will they? Here’s my first wee report for No More Workhorse.

Todd Phillips made a career out of fusing comedy with ‘high concept’ action, raking in a fortune from the Hangover trilogy. Hill transcended gross out comedy to earn an Oscar nomination for his outsized role in Scorsese’s Wolf of Wall Street. Teller, hazed in a series of frat house comedies, gained attention for his turn in critical darling ‘Whiplash’. So can the Philips succeed in wringing engaging and humorous performances from such promising leads?

After Broken Social Scene’s initial tryptic carried the collective Toronto scene to international acclaim, the Kevin Drew / Brendan Canning centred alt-pop collective had the wit, canny and sheer cynicism to launch a series of ‘Broken Social Scene Presents:’ records – beginning with Kevin Drew’s ‘Spirit If’, a riotously experimental indie rock record, twinkling with wide eyed valiance – and near enough as collaborative as the original Broken Social Scene project. The second BSSP record has now hit. ‘Something For All Of Us…’ provides a platform for Drew’s cofounder, Brendan Canning. More conventional, if no less energetic than Drew’s début, SFAOU spans the gamut from uptempo cinematic instrumentals (‘All the Best Wooden Toys Come From Germany’), to dreamy shoegaze on ‘Been at it So Long’ & ‘Chameleon’, to grittily melodic alt folk of the Jeff Buckley school (‘Snowballs and Icicles’, ‘Possible Grenade’). Less successfully are the weak Lisa Lobsinger driven pop song ‘Antique Bull’, and the blandly funky ‘Love is New’. Overall, Cannings voice is warm, and his guitar and horn lines catchy, but there’s no snare driven pop anthem to compare with Drew’s ‘Safety Bricks’. None the less, this fuzzy, likeable record should hit the spot for salivating BSS fans.?

I vacuum the CD into iTunes with trepidation. I’m about to review the début album from the most feted Irish live act since Whipping Boy. Fight Like Apes make energetic, clever, sexy music – pop punk in the best possible sense. Live, the band are stunningly entertaining, shooting about the stage drenched in sweat, MayKay screaming and flipping her banshee mane, Pockets headbangin’ in a karate headband like he’s about to loaf his synth in two. After released critically two acclaimed EP’s – ‘How Am I Suppose To Kill You If You Have All the Guns’, ‘David Carradine Is A Bounty Hunter Whos Robotic Arm Hates Your Crotch’, the band are set to release their first feature length record at the end of the month. So what does it sound like?

Straight off the bat, vocals are noticeably cleaner, ‘Jake Summers’ is still a great song, now faster and sounding more like early 90’s “crunch sticky indie pop” (i.e.: Nerdy Girl) than a synthy Hole – eroding the destination between the intro and the ‘that’s not nice what you did to me’ interlude and replacing MayKay’s wonderfully angry ‘fuuuuuck’ with a weaker group chant. ‘Lend Me Your Face’ has been tinkered with, varying the synth tones that run over the intro, it’s more rounded but loses some of it’s furious smirk. ‘Battle Stations’ features sharper guitar and more developed farty synths, but the softer vocals may divide fans, especially in the synth-horn section. ‘Do you Karate?’ sounds less flat and fuzzy overall especially on the ‘shit shit shit shit bang bang’ shouty bit ™.

Of the new tracks ‘Digifucker’, a simple bass heavy track built around almost squeaky chiptuneque synth, horns and scuzzy guitar, is pretty. ‘I’m Beginning To Think You Prefer Beverly Hills 90210 To Me’, an imaginary exchange of letters between the band and a former manager, easily lives up to the bands older material, complete with trademark hilarious shouty bits ‘Suplex, suplex, suplex backbreaker’ and ‘You’re So Fired’. It could be the best track on the album. ‘Lumpy Dough’ is a great ‘You Are the Hat ‘ style, lush dreamy track, reminiscent of Moon Safari era Air minus the vocoder. ‘You Are the Hat ‘ incidentally makes an appearance on the albums vinyl release. ‘Something Global’ – already released as the albums début single, is poppy with a catchy ironic ‘gimme my hook’ hook. ‘Recyclable Ass’, despite its awesome chiptuny intro, and ‘Tie me up with Jackets’ are fun but less memorable. ‘Knucklehead’, a great Something Global b-side (available on the bands MySpace), didn’t make the cut. All the new tracks share MayKay’s trademark acerbic nonsense lyrics, bitchy-silly catch phrases that somehow never quite sound trivial.

Interesting, the album seems to have been mixed for headphones rather than speakers, an odd choice for a grungy act. Tracks like the final cut ‘Snore Bore Whore’, work far better on a good pair of cans (sic).
The cover, featuring artwork by Analogue photographer Loreana Rushe (which I’m told folds out into a huge poster for you ass), is a throwback to the bands first single (‘David Carradine..’) featuring a skeletal figure carrying, you’ve guessed it, a golden medallion.

Fight Like Apes may have stumbled, albeit it only slightly, into the over clean production trap that lies in wait for Irish acts (what’s so wrong with lo-fi?), but the fresh tracks on this album are strong enough that those worried about FLapes future should have few concerns.

The new album will be available to stream from midnight tonight (Thursday 18th September) on Entertainment.ie. Fight like Apes and the Mystery of the Golden Medallion is available in shops and online from September 26th for a very reasonable €14.99. 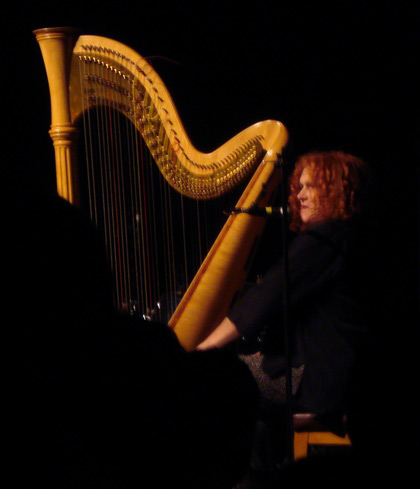 Support for Will Oldham at Sundays gig was provided by the enigmatic and unexpectedly wonderful Baby Dee. Antony Hegarty with a sense of humour, Baby Dee begins with the delicately beautiful ‘Look at Me’, on piano with Cello accompaniment. As the set progresses, it opens into a rich and full bodied four-piece cabaret, as Dee flits from piano to harp.

As a transsexual Baby Dee is ludicrous; cracking with oafish masculinity, like John Lithgow in the World According to Garp. As an artist she excels, weaving burlesque fairy tales that leave Vicar Street breathless – literally the venue, exhibiting an appreciation of the show far greater than that of the goateed office milksop audience, who blithy gab throughout.

Baby Dee‘s fifth LP, the biographical ‘Safe Inside the Day‘ (produced incidentally by Will Oldham, and featuring a host of musoratti from Max Moston to Matt Sweeney), is out now on Drag City.