New review up. This time of the Sony PWX-FX9. The 6K sensor full frame successor to the FS7. We look at everything from colour to usability, to the changes Sony are bringing to the camera later this year. If you’ve been considering an upgrade, or even thinking about this as your first cinema camera. This is the review to watch, especially if you’re based in Ireland. Please share with anyone you think might be interested. Paul Lynch and myself put absolutely tonnes of work into exploring every aspect of the camera. Trying to answer the question as much for ourselves as for you, is this the camera you should buy next?

Sony’s latest powerhouse production camera, his full frame beast follows up on the success of the FS7, which has become the go to camera for documentary and corporate shooters. Is this a worthy successor to the much loved FS7? What do its new features – like autofocus, full frame shooting, and S-Cinetone bring to the table? All this and more answered, in our comprehensive review.

Thanks to camerakit.ie for lending us the gear!

Over the past few months I’ve been working on ideas for sketches and short movies. Radio is great and all, but the audience for radio comedy is limited and for radio drama, practically non-existent. With that in mind, I’ve been developing some scripts and shooting a couple of test shorts – one of which has made it out into the wild. I’m lucky enough to have some extremely talented friends who’ve amassed cameras, lights and sound equipment and aren’t afraid to use them. That said, I always feel nervous using other folks equipment – if it breaks I’ll have to replace it, and feel awful, and I still won’t have my own camera. Plus, you always learn more when using (and having to pick) your own equipment.

After a few months of ferocious poverty, I’ll soon have a trickle of cash coming in from my latest drama series for Newstalk (more to follow on that, mucho excited). Now’s the time to pick up some very basic video recording equipment. Ideally I’m looking for an easy to use setup that has non-awful picture quality, steady shots, usable battery life, and decently long recording time. Since we’ll be recording sketches, it needs to work in ‘low light’ (in other words, inside a normal house, without additional lighting). And since I work in ‘the arts’ I can’t spent too much on the whole dealio. After buying a bunch of crap over the years I’ve figured out two things 1) you really need to try before you buy, or failing that ask people who regularly use the same stuff 2) the ‘best’ equipment is the equipment you can best use, not what can theoretically do the most in perfect conditions in the hands of an expert. I can’t tell you the number of times I’ve sat around on film sets while the DOP fussed with a camera and the light died – complex camera setups make simple things very much harder and longer to make.

I already have a decent sound recorder (the Zoom H6) and mic (Rode NTG2) , which I use for radio work. I also own a cheap DSLR I picked up in the states a couple of years ago – the Canon Rebel T4i (known in Europe as the 650D). Right now I only have the ‘kit lens’ it comes with, which sucks for video, especially in low light. The Canon has a whole bunch of limitations. It doesn’t like to record for more than about ten minutes at a go. The battery dies after maybe 30 minutes of video. It’s slow to focus, even with a good lens. And it’s relatively complicated to use. So here are the options I considered. 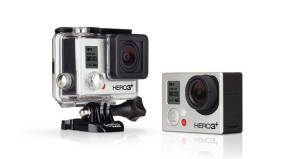 4) A cheap android phone with a good camera
+ cheapish
+ also a phone
– limited memory (32 gig max)
– shooting a lot could wear out the phone
– battery life
– cameras aren’t good until you hit a pretty pricey phone
– phones break, crash, and get grumpy when wet.

After chatting with a bunch of friends, including camera geeks and comedians who regularly shoot sketches and shorts, this is what I’ve decided to pick up.

1 * Sony HDR-CX405 camcorder – 215.00
– This tiny camcorder seems to work unusually well in low light, gets a couple of hours video on one battery, it can transfer video via wifi, and has very good depth of focus and good onboard sound. Hopefully it’ll be perfect for simple sketches.

1 * Canon EF 50mm f/1.8 STM lens – 134.00
– This ‘nifty fifty’ lens has a really low f.stop, which the camera geeks assure me means it’s great for low light. It’s also got a quiet STM motor, for less jarring and noisy focusing. It’ll help me learn to shoot video better on the DSLR, and perhaps be good enough for making shorts – although issues with staying in focus, and more complex setup means we’ll probably not use it for sketches, at least at first.

1 * 64GB Class 10 SD card – 35.00
– A cheap if slightly low spec memory card. Should be fast enough for video recording on both the Sony camcorder and the Canon camera.

1 * low cost steady cam rig – 100.00
– This ultra cheap steady cam thingamejig is a little bulkier and heavier than I’d like, but it should work with both the camera and camcorder, and let us do handheld shots without too much horrific shakiness.

Thanks to Sean Burke, Seb Dooris, Shane Conneely and Orla McNelis for all the advice.